9 Inducted to Athletic Hall of Fame 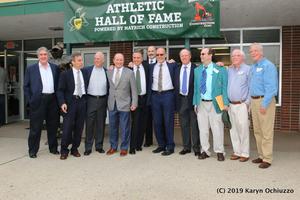 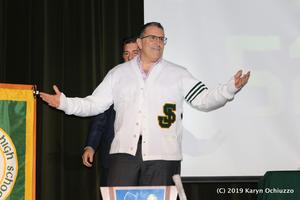 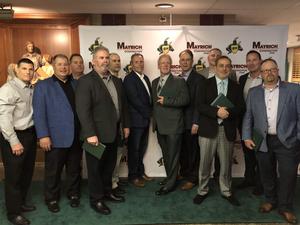 Photo Gallery
On Saturday, May 4, Saint Joseph Regional High School inducted nine new members into the inaugural class at the Athletic Hall of Fame celebration, powered by Mayrich Construction.
The evening began with cocktail hour in the school courtyard before attendees filed into Inserra Theater to enjoy the Kentucky Derby.
Mike Quick of ESPN Radio welcomed the guests before turning the program over to SJR president Barry Donnelly '71 who highlighted the long history of success on the fields for the Green Knights before Quick introduced the night's first honoree.
Kevin Mendillo '80, who was ushered to the stage by his brother Michael '82, was the first to don the Hall of Fame sweater. He thanked his teammates, many of whom were in attendance, for the memories from his time as a Green Knight.
Current Director of Athletics Damion Logan '96 was inducted for his prowess on the mat, winning three state titles in wrestling during his time at SJR. He thanked his coaches and mentors, including James Tabano '68 and former SJR head coach Kerry Kolheffer.
Cooper Rego '97 strutted across the stage to James Brown's "The Boss" before acknowledging coaches Karcich and Augie Hoffmann '99 to giving him the opportunity to excel on the field and to coach the next generation of Green Knights.
Multisport star Joseph Scott '99 was honored for his success on the football field, the basketball court and baseball field. With many friends, family and teammates in attendance, Scott was given his sweater by Coach Karcich.
JR Inman '05 was the final outstanding athlete to be inducted and was joined on stage by classmate TJ Caleca '05. He remembered all the moments driving home from games with his father who is now battling Stage IV prostate cancer and asked the audience to join him in a rousing "I believe that we will win" chant that his father might hear across the border in Pomona, NY.
Contributor Judy Corker received a standing ovation as she took the stage. "The Voice of the Green Knights" held the mic for more than 20 years and always took the time to "make us sound like really good players," according to Devin and Jason McCourty '05 who sent a short video message.
Barbara Horan was next as she and her husband Frank were honored for their outstanding tenure as SJR hockey coaches. The couple led the program to two state titles in the mid-1980s and amassed 129 wins in just seven seasons.
Finally, the night saw two teams inducted to the Athletic Hall of Fame. Former New York Yankee and YES Network analyst John Flaherty '85 and former captain and team leader Mike Neglia '84 spoke about the 1984 baseball season which saw the Green Knights capture the program's first-ever county championship. Since then, SJR has added nine more for a county-record 10 titles.
Lastly, the 1969 track and field team, recognized by The Record as the Team of the Century, rightfully took its place alongside athletic giants. Warren Clark '69 and Chris Weigl '69 spoke about the team's success before head coach Bob Murphy delivered a short thank you.
Print