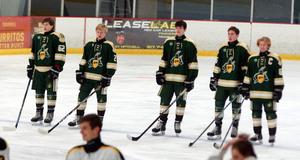 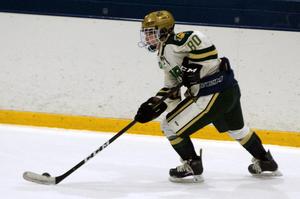 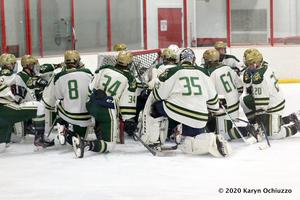 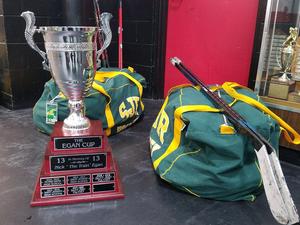 Following a 16-6-3 season in 2018-2019, the Saint Joseph Regional varsity ice hockey team improved dramatically this past season as they posted a 21-2-1 record on the season.

In a season highlighted by an Egan Cup win and a Big North Gold Cup win, the Green Knights’ stellar defense helped carry them to having the tenth ranked team in New Jersey. Anchors Dean Tobin ‘20 and Michael Angeletti ‘21 contributed to the backline's exceptional performance. “We had a very young defensive core this year, but we were a very talented one,” said Tobin. “We were definitely overlooked at the beginning of the season, but my teammates and I love to prove people wrong.”

The other side of the puck cannot be overlooked, either. The offense was led by wing Justin Hughes '21, who paced the team with thirty-two total points, fifteen of them coming from goals. Right behind him was captain Justin Rauch '20, who totaled twenty-eight points, thirteen of them goals.

Arguably the most solid part about the Green Knights hockey team this season was the play of the goalkeepers. Jacob Serey '20 and Tomas Spero '21 were the definition of an iron curtain for the Green Knights. Both goalies posted a GAA of just over one goal, while each recorded multiple shutouts. Serey and Spero were no doubt crucial to the Green Knights’ success.

The Green Knights started off the season with a 9-0 win against Paul VI High School. Rauch led the team with two goals to go along with an assist, and Thor Hansen '21 also had a goal and two assists. Their next match-up against Paramus ended in a tie - their only one of the season. Aidan Garabed '20 played hero for the Green Knights as he had the game-tying goal with less than a minute left. After tying Paramus, the Green Knights went on an incredible thirteen game winning streak that included six shutouts against teams like Northern highlands, Pascack Valley, and Saint Joseph Metuchen. The streak also included an opening round 3-0 win in the Bergen County Tournament against Paramus.

That victory propelled the Green Knights into the semifinal round against rival Bergen Catholic. Unfortunately, that game resulted in a 3-2 loss for Saint Joe’s. It was an extremely hard-fought game between the two teams. Serey played a big part in helping the Green Knights stay in the game with his thirty-four saves.

Bouncing back from their first loss in sixteen games, the Green Knights went on yet again another winning streak, this one being seven games long. The streak included two shutouts and wins over teams such as Old Tappan and Tenafly.

Most notable about this winning streak was the Green Knights’ capture of the Egan Cup and the Big North Gold Cup. Their Egan Cup win came against Saint John Vianney, a game which resulted in a 5-2 victory for Saint Joe’s. In order to compete in the final round of the Big North Gold Cup, Saint Joe’s had to defeat Indian Hills. They did just that, besting them by a score of 2-1. They then faced Lakeland in the finals and defeated them 4-1.

In the first round of the NJSIAA Tournament, Saint Joe’s had their season cut short in just their second loss of the season. It came against Morristown-Beard, who defeated them by a score of 4-1.

Needless to say, it was an extremely successful season for the Green Knights. All that’s left to do is to reflect back on the success that took place this season, and build upon it for the next one.