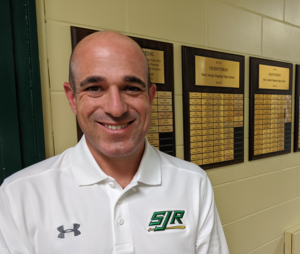 Asselta brings 20+ years of communications, broadcasting and writing to the role

“We are happy to welcome Ryan back to campus. As a communications professional, Ryan is particularly well situated to share the stories of success at St. Joe’s with prospective families,” said McNulty. “We look forward to his dynamic presence in the hallways of SJR once again.”


Asselta, who gave the Commencement Address at SJR for the Class of 2018, brings a wealth of experience to the position. After sixteen years as an anchor, reporter, producer and writer with Fox Television in Fort Myers, Boston and New York, Asselta most recently served as a video host, producer and writer for Sports Illustrated and Golf.com.


"Returning to St. Joe's is truly a homecoming for me,” stated Asselta. “My time as an SJR student helped to shape many aspects of my personal and professional life. I am thrilled to have the opportunity to share the many stories of what makes SJR unique and to play a role in producing future generations of Green Knights.”


Originally from Rockland County, Asselta was a captain of the basketball program and pitched for the baseball team as a student at SJR. He also performed on stage in three musical productions. Upon graduation, he earned his B.A. in communications from Stonehill College, with a minor in journalism.