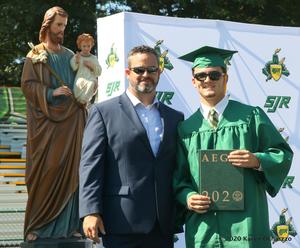 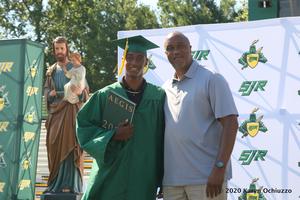 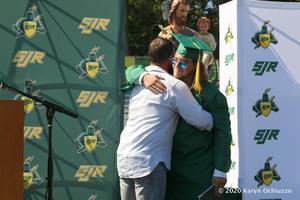 Photo Gallery
On July 18, 135 Green Knights crossed the stage into the ranks of alumni. 123 of them were greeted by Principal Michael Bruno '05 as he handed off their Aegis yearbook (diplomas were distributed in June due to the pandemic).
For the other 12, a special guest joined them on stage.
From Todd Alderton '87 to Paul Szabo '88, a dozen fathers did the honor by welcoming their son as an alum of SJR.
"It's a special thing when your kids can follow in your footsteps...and do better than you did," said George Stewart '89, father of Shane, who is headed to Georgetown.
"Over the years I had always been impressed with the commitment to academic success along with continuous improvements to the facilities. As a parent, I wanted my son’s high school experience to be fulfilling while also preparing him for the challenges ahead, in college and beyond," said Chris Santise '89, father of Troy.
Todd '87 and Travis Alderton (St. Joseph's University)
Robert '88 and Malcolm Capers (Elon University)
Dennis '90 and Daniel Francis (Quinnipiac University)
John '87 and Aiden Graff (University of Hartford)
Dan '87 and Brayden Kelly (Penn State University)
Patrick '86 and Declan Henry (Providence College)
Chris '89 and Troy Santise (Vassar College)
Brian '90 and Devin Stapleton (The College of New Jersey)
Kevin '81 and Matt Stapleton
George '89 and Shane Stewart (Georgetown University)
Paul '88 and Paul Szabo (Lynn University)
Bob '81 and Luke Wypler (Ohio State University)
Print