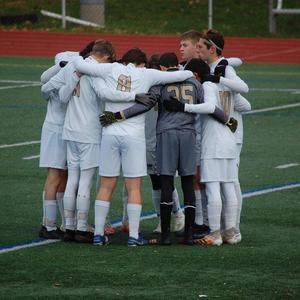 Yogi Berra once said “It ain't over till it’s over”

The SJR soccer program faced off against rival Don Bosco Prep in the NJSIAA state tournament on Tuesday and with their season on the line, the Green Knights made Yogi proud.

The Ironmen were on the attack early. From 25 yards out; senior midfielder Jordan Banfield delivered a strike to give DBP an early lead with 22 minutes left to play in the first half. Both teams created a multitude of opportunities to score in the first half of play, but could not capitalize on them. The first half whistle blew and the Green Knights trailed the Ironmen 1-0.

The Green Knights defense was stellar in the second half of play. Dan Brennan '23 continued to be a leader for the SJR defense, making huge stops on multiple DBP attacks. Goalkeeper Tyler Tofts '21 was a brick wall in the net, as DBP would not tally another goal for the remainder of the game. With five minutes left in the match, Don Bosco Prep was not prepared for what the Green Knights had in store for them.

With 4:45 left on the clock; SJR was awarded a free kick in Don Bosco territory. Midfielder Charlie Slevin '21 delivered a beautiful ball to Brennan, who fed his brother Brian '21 for the game-tying goal. As many fans believed the game was headed into overtime, the Green Knights had other plans. Brian Brennan lofted a pass in the box that found the foot of Slevin, the midfielder's shot struck the back of the net erupting the SJR crowd. The Green Knights took the lead 2-1 and two minutes later that’s the way the game would end.

After the thrilling win, the Green Knights hope to carry their momentum into the semifinal game against St. Peter’s Prep at Caven Point on Thursday, November 19 at 2:00 p.m. in Jersey City.