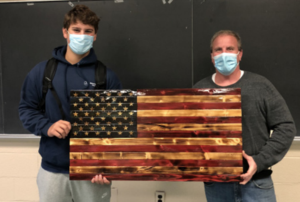 Donohue started new business with handmade wooden American flags during the pandemic
By Thomas Brennan ‘24
For many people, COVID-19 shut down or negatively impacted their work, but other individuals have used the time to be creative and start new businesses.
Mike Donohue ‘22 explored a new hobby of making American flags out of wood, and thus a new business emerged.
Donohue had previously seen videos on YouTube where people made American flags out of wood and was interested in trying it out, but he had never found the time to attempt the process on his own.
The down time during the pandemic gave him the time he needed to develop his new hobby. Mike’s neighbors were rebuilding their deck during the pandemic, and he helped out. The neighbors taught Mike how to use power tools. These new power tool skills and some boredom led Mike to Lowe’s one day in April. He had re-watched those YouTube videos and decided to buy some materials to make his first American flag.
Mike started his first flag in April and has since made more than twenty-five flags.
To make the flags, Mike gets 8-foot pieces of wood and cuts them into 37-inch pieces. He makes 13 pieces for stripes on the flag and then sands down the wood to get rid of the rough finish. Next, he uses a handheld torch to give the wood a medium burn. After that, he stains the pieces red or blue to match the flag. Equally important is the addition of the stars to the blue portion of the flag. He flips the project over and clamps everything together. Following this clamping, he attaches braces to the back that secure the flag. Finally, he puts on two coats of finisher and sands the finish down, and thus the flag is complete.
“My biggest challenge in the process is applying the finishing coat to the flag. If the finishing coat isn’t put on correctly, then I have to start over," explained the SJR junior.
When Mike started making the flags, he would offer them as gifts to friends and family. When others saw his work, they requested flags for themselves.
His business grew fast due to word of mouth, and each project led to more and more requests. Mike currently works hard on his business, spending approximately 20-30 hours a week on his projects and producing around 3 flags per week. "The best part is seeing the final product and knowing it will hang on someone's wall.
Print