Student of the Week: Thor Hansen '21 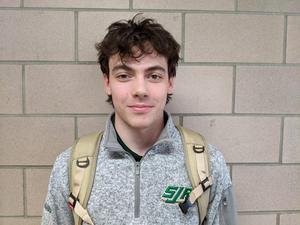 Hansen serves as Knight Ambassador, Student Council VP & earned 2nd Team All County honors in hockey
When he's not at the rink, the odds are good you'll find Thor Hansen '21 on campus - either giving a tour after school or working to better the student experience through Student Council.
Hansen, a 2nd Team All County honoree for the hockey team, spends as much time as he can on the ice - playing for the Green Knights as well as the Jersey Hitmen.
But once out of his skates, Hansen has emerged as a "go-to" tour guide for Mr. Asselta's Ambassador program. Often, he is showing families the campus after school 2-3 times per week.
"I enjoy getting people to see the full experience of St. Joe's, just helping to make their decision easier," he explained.
The Executive Vice President of Student Council, Hansen is also a member of the National Honor Society. He touts Sports & Literature as his favorite class and Mr. Lanari as his top teacher this year.
"But Mr. Man (Maniscalco) was the best."
For the Green Knights hockey team, he pitched in 11 points in 13 games, playing top minutes against the state's best in the Gordon Conference.
In his rare spare time, Hansen is working to earn his motorcycle license. By mid-April he hopes to take the Harley out of the garage for good. He also enjoys snowmobiling and four-wheeling in the Adirondacks.
Nominated by Principal Bruno '05.
Print