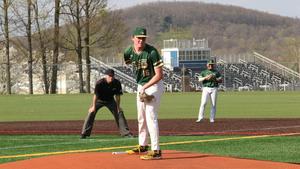 Green Knights off to Hot Start

The SJR Varsity Baseball Team had been anticipating April 19th for well over a year. The team’s first opponent was the Fair Lawn Cutters. Jude Zern ‘21 got the start on the mound and did not disappoint. Zern pitched 5 complete innings of solid baseball while only giving up 2 runs. Although the pitching for the Green Knights was phenomenal, the offense came to play as well. SJR totalled 16 runs against the Cutters which was the spark they needed after a sluggish start in the pre-season. Albert Serrano ‘21 was the most notable contributor with a total of three hits on opening day.

Following their dominant win the day before, the Green Knights were immediately put to the test in their second game against the Pope John Lions. It was SJR ace and Boston College commit Sean Hard’s ‘21 turn on the mound. Hard quickly showed why he is the ace of this staff completing 6 strong innings while giving up just 1 run. This game was a true pitcher’s duel. The Lions scored early in the first inning on a sac fly. The Green Knights answered back with an inside-the-park home run by Jimmy Romano ‘21 to tie the game at 1-1 in the second. Later on, SJR found themselves with runners on first and second with 2 outs in the inning. Jeremy Acosta ‘21 delivered the biggest hit of the game which gave the Green Knights the 2-1 lead. This turned out to be plenty of support for Hard who was dominant. The Green Knights then turned the ball over to Brendan Lysik ‘21 who secured the victory and his first save of the young season.

Next up , for the Green Knights was Indian Hills. SJR turned to junior pitcher, Casey Knuckles ‘22, for the start. Knuckles was a bit shaky in the first after surrendering 2 early runs, but recovered quickly after the early struggles. The junior would hurl  6.0 innings and record 10 strikeouts. The offense found themselves having much higher quality at-bats and driving the ball all around the yard. The Green Knights went on to beat Indian Hills 8-2.

The fourth and final game of opening week for the Green Knights was against Pascack Valley. SJR had previously lost to Valley in their first scrimmage of the year 6-0. Looking to change the narrative, the Green Knights gave the ball over to sophomore Stanley Moreno ‘23. This was Moreno’s first varsity start of his high school career. The sophomore dazzled in his first appearance recording 12 strikeouts in 5  innings of work. The offense was not going to let Moreno’s masterful performance go to waste. The Green Knight bats erupted for 4 home runs off of the bats of  Hard ‘21, Derek Benzinger ‘21,  Serrano ‘21, and Nick Martinez ‘23. SJR captured the win 13-6.

The Green Knights have four games coming up next week including their first two league games against Paramus Catholic. Following the Paramus Catholic contests, SJR will face Clifton and Pascack Hills.