Student of the Week: Ben Hajek '21 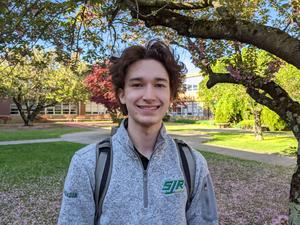 Star of "Something Rotten!" Musical to Study Psychology in Seton Hall's Honor Program
Part of the high school experience is learning what you didn't know you didn't know.
Ben Hajek '21 will head off to Seton Hall University in the fall, a member of the school's Joint MD Honors Program, studying Psychology.
Notably, it wasn't until his senior year that he even had an interest in psychology. Inspired by his favorite class, AP Psychology with Mr. David Stoto, Hajek has found something he wants to pursue in his future.
"I really like it, it's interesting and I'm looking forward to the Seton Hall Joint MD program," the West Milford native explained.
No slouch in the classroom, he is ranked in the Top 10 of the senior class and earned Principal's List recognition last marking period.
In addition, Hajek is a key contributor to school life. Beginning May 7, he'll star as the lead, Nick Bottom, in SJR's production of the Broadway smash Something Rotten!. The Tony Award winning musical is known as a hilarious and clever musical, but for Hajek, his favorite part is the period costumes.
Off the stage, he is a Knight Ambassador and the President of SJR's Social Action Alliance as well as a member of the National, Spanish National and Tri-M Music Honor Societies. Hajek also interns with Professional PT, the school's athletic training program.
Nominated by Mr. Bruno & Mr. Donnelly.
Print