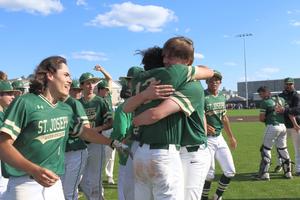 Green Knights defeat Don Bosco Prep 6-5 to win County Title.
By Will Tallant
It's celebration time in Montvale as the Green Knights captured the 2021 BCCA title in dramatic fashion over Don Bosco. This is SJR's 11th BCCA victory and their first since 2016.

A combination of clutch pitching and timely hitting were the key factors for SJR. It started in the first inning when the Green Knights put up three runs in the blink of an eye. After Albert Serrano's '21 RBI-fielder's choice, Derek Benzinger '21 laced a double into the left-center gap to plate two runs and give the Green Knights a much needed early lead. However, Don Bosco answered immediately with three runs of their own in the bottom half of the first. Keeping their foot on the gas, Don Bosco quickly gained the lead after scoring two more runs in the second.

This would be it for the Don Bosco offense as the Green Knights turned to Brendan Lysik '21 out of the bullpen to keep the game from slipping away. Lysik was simply masterful in 3.1 innings, striking out 5, and allowing 0 hits and 0 runs.

Later in the fifth inning, with less and less outs to play with, Ellis Garcia '21 singled to left to spark a SJR rally. After a fielder's choice, Jimmy Romano '21 stepped up to plate as the tying run with two outs. With two strikes, Romano provided the most clutch at-bat of the season as he hit a 2-run home run to tie the game at 5.

The game was still tied 5-5 when Sean Hard '21 came to the plate in the sixth. Hard got into one of his own and crushed it out to left field to give the Green Knights a 6-5 lead. That was all SJR was going to need. Romano came in to pitch and recorded the five-out save.

SJR has now won their second championship of the season and are looking for history as they chase for the state title in order to win the "triple crown."
The Green Knight's first state game is on Friday (6/4) and will be played in Montvale.
Print