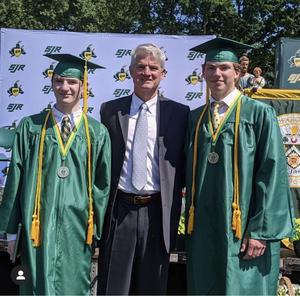 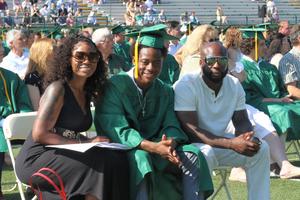 Class of 2021 Earns Nearly $20M in Scholarships
Photo Gallery
The Fifty-Sixth Commencement in SJR history took place on a sunny morning, June 5 at Dinallo Stadium with 117 graduates receiving diplomas. While the ceremony was live-streamed, seniors and their parents, as well as the faculty, sat on the field while family members watched from the bleachers.
Tomas Spero was the class valedictorian; Joseph Gil was the salutatorian. Both members of the Green Knights hockey program, they recalled their team’s Cup championships and both included SJR football’s 13-0 MetLife win over Bergen Catholic as one of their best memories. Both acknowledged the impact of the pandemic, but as Gil remarked, “we adapted, we got through it together and we are now stronger than we were before.”
Quinn Burns was awarded the St. Joseph Medal, as voted by the faculty, emblematic of the qualities of loyalty, leadership, scholarship, service, industry and active Catholicity.
Dr. Paul Collier ’71 gave the commencement address. Dr. Collier is a vascular surgeon, and one of five brothers who attended SJR in the 1970s. His classmates Barry Donnelly, Mario Grosso, Ed Koch and Ed O’Dea were on hand to celebrate the fiftieth anniversary of their graduation with the Class of 1971.
As a group, the Class of 2021 achieved a remarkable level of academic success, earning more than $18,300,000 in scholarship offers (an average of $156,410 per student), and were accepted to more than 225 difference colleges and universities including Amherst, Boston College, Brown, Colgate, Cornell, Dartmouth, Duke, Emory, Georgetown, Harvard, Holy Cross, the University of Miami, Middlebury, Notre Dame, the University of Pennsylvania, Princeton, Villanova and Yale.
Nearly a quarter of the Class of 2021 will be staying close to home, with 16 Green Knights attending NJ state institutions, while 12 more will be local at Fordham (4), Seton Hall (4) and Stevens Institute of Technology (4).
Print