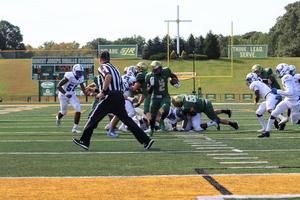 It was another spectacular day on Chestnut Ridge Road as SJR welcomed alumni to campus for Homecoming Weekend. As the former Green Knights reminisced about their time at SJR, the current football team celebrated 25 seniors and five senior cheerleaders for their commitment and accomplishments over the last four years. To add to the excitement, the Green Knights improved to 3-2 after a dominating 38-0 win over Montclair.

As the season hits its midway point, the Green Knights have now outscored their opponents 69-5 in their last two games. This past weekend the offense was led by a host of powerful running backs. Luke Tucci '23, Yasin Willis '24 and Devin Miller-Singh '23 combined for 240 yards on 28 carries with three TDs. Quarterback Luke Henrich '23 also added a score through the air, connecting on a 37-yard pass to Donovan McKoy '23 - for McKoy's second receiving touchdown of the season.

The stifling SJR defense pitched their first shutout of the season. Jalen Wade '22 had an early interception to get things rolling, followed by four consecutive forced punts in the first half. This was enough for the offense to explode and lead the Green Knights to a runaway victory. The defense has now just allowed 5 points in their last two games and has given up 49 points this season.

The Green Knights will look to continue their solid play on October 9 as they host St. Peter's Prep. The Marauders come in at 5-1, ranked #5 in the state. SJR has won three of the last five meetings including the last three at home. Kick-off is at 1:00 p.m. at Dinallo Stadium.