Student of the Week: Austin Losardo '23 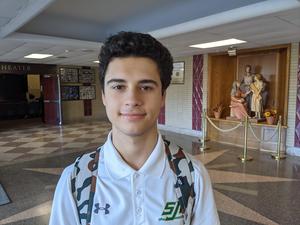 For the first time in his SJR tenure, Austin Losardo '23 earned Principal's List honors this past marking period. WhiIe he admits that math is not his strongest subject, his 96 in Algebra II would belie that point.
He diligently worked his way to the 'A' grade, thanks in part to his quarterly exam. Mrs. DiMeglio stated, "I had assigned the boys to create their own study guide on four major topics. Austin gave me typed up 10 pages of a study guide he created. He included all the rules, formulas, notes, side notes he took in class."
Hard work pays off for Losardo, who also enjoys time in the Chess, Italian and Ecology Clubs while singing in the chorus. The Westwood native gets his workout fix with Mr. I's Health & Fitness Club as well.
Nominated by Mrs. DiMeglio
Print