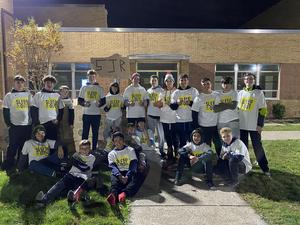 On November 9, SJR took part in the 11th Annual Covenant House Sleep Out. This is an event where students sleep outside for a night to put themselves in the shoes of homeless teens. Before the event takes place, each student is asked to send out a link to their family and friends to raise money for Covenant House, the organization that helps homeless youth by giving them food, shelter, immediate crisis care, and other services. The goal for each student was to raise $300.

The night started at 9:30 pm, when students and their families met in the Inserra Theater for a presentation. John Asselta, the Director of Performing Arts who organized the event, thanked everyone for donating and being there, and he then introduced a staff member and two residents of Covenant House. Both of the teenagers talked about their lives and experiences as homeless teens, and how they found Covenant House .

Both residents shared the emotional fear that comes with living a life where you don't know what is going to happen next, where you are going to sleep that night, and never truly feeling safe.

After they were finished speaking, Executive Director Jim White talked to the students about his experience with Covenant House and homeless teens. He talked about how important it is for the students to put themselves in the shoes of homeless teens, and how we will grow as young men, from taking part in the sleep out.

The students then went into breakout rooms, where they had the chance to speak with the Covenant House residents face to face. They were able to ask them questions about their lives. They also had a worksheet where they answered questions. The questions helped the students think about what their life would be like if they were homeless. After the breakout sessions, everyone went back to the theater for a prayer session dedicated to homeless teens. The prayer was led by Mr. Becker, the Director of Campus Ministry.

After a quick meal the Green Knights made their way outside to the courtyard to prepare for their sleep out. Each student received a cardboard box and a garbage bag, and they were able to bring sleeping bags and blankets from home. For the first hour, the students could set up their sleeping areas and talk with their friends. Some guys even built large forts with their boxes and other structures, like picnic tables. After some time, the lights went out and the students had to go to sleep. In the morning, the students were treated to breakfast in the cafeteria. The boys were then able to go to the locker room and get ready for the school day.

When asked about his experience in the sleep out, Frank Perrone '24 said,”It was an amazing experience that made me feel more connected with myself and God. I will definitely sleep out next year.”

The event proved to be a major success, having an impact on the SJR students as well as raising more than $50,000 for Covenant House and homeless youth.