Retreats Give Sophs Opportunity to “Come and See” 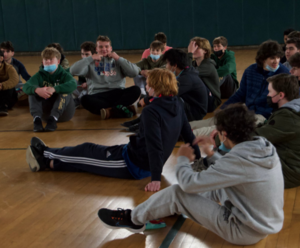 By Nicholas Steinhauser '22
On December 1-3, the SJR sophomores participated in retreat activities that allowed them to reflect upon their relationship with God. The events were divided into two days, with December 1st consisting of an in-school retreat, and the December 2nd retreat being held at Esopus in New York.
Since the sophomores never had an opportunity as freshman to go to Esopus due to the coronavirus pandemic, last week was the chance for most of them to experience the retreat center for the first time. Mr. Becker, SJR’s new campus ministry director, made the theme for these retreats to be to “come and see” Jesus spiritually and to understand how to incorporate the Lord more in life.
With the help of St. Joe’s campus ministry senior leaders, Mr. Becker coordinated both events and was able to balance activities based on both fun and prayer. The in-school retreat took place on December 1st, and it involved multiple religious and sports-based activities to keep the sophomores engaged. The events first started with an opening prayer and icebreakers, and the students were then divided into groups managed by the senior leaders. For most of the day, Mr. Becker held this sophomore retreat outside on the football field, where the sophomores participated in faith-based activities that fit the theme of “coming and seeing” Christ, such as a rope prayer.
The students also heard leadership talks from Ryan Tobin ‘22, Conor Mahoney ‘22, and Jalen Wade ‘22. Tobin talked about how he has transformed his end goal in life to being with God. Mahoney explained the importance of answering the call to “come and see.” Wade discussed how his experience with “coming and seeing” God has changed his life.
The sophomores, with the help of their senior group leaders, had the chance to reflect upon these talks and their relationship with God. At the end of the school day, the sophomores came out of the retreat renewed in their faith and excited for the future.
The Esopus retreat took place on December 2nd and the morning of December 3rd. Unlike the in-school retreat, this event was held overnight, so the sophomores who attended it had more time to enjoy the Esopus retreat center. This retreat, similar to the in-school one, also started with icebreakers, which happened in the gym of the Esopus center. Mr. Becker changed the retreat schedule for Esopus as a way to center the activities around what the place had to offer. The same three talks were given at Esopus, but they were instead presented by Nicholas Steinhauser ‘22, Luis Saenz ‘22, and James Titolo ‘22. After the talks, the sophomores were once again divided into their small groups assigned to them with a senior leader to reflect upon the material that was presented to them.
In contrast with the in-school retreat, Saenz was able to say his talk by the Hudson River, which the sophomores were able to get to by walking along a trail. Everyone was also served breakfast, lunch, and dinner. At night, the sophomores participated in a Jeopardy game that consisted of historical facts about St. Joe’s, which was a yearly ritual that they missed out on last year due to COVID-19. They were also told scary stories right before bed, which definitely helped the sophomores bond with one another and have a fun time.
Mr. Becker, who is eager to add new religious traditions at St. Joe’s, emphasized adoration at both retreats. He believes that adoration will help the SJR students reevaluate their relationships with God. Since adoration was a primary factor at the retreats, the sophomores also had the opportunity to speak with God closely with prayer. Through this adoration, along with the other activities and talks, the sophomores had a great time at their retreats. Both sophomore retreats were great successes, for the sophomores seemed to come out of the retreats reflective and truly enjoyed the experiences that they had.
Print