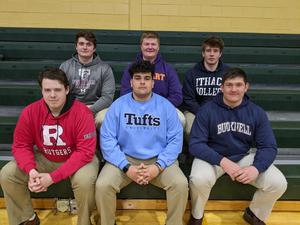 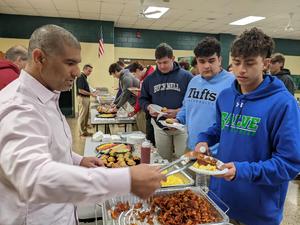 Photo Gallery
On Monday, May 2, SJR celebrated its seniors with the annual College Sweatshirt Day breakfast.
Zarrette Rogers '03 spoke to the Class of 2022 about "Community, Courage and Christ," remaining engaged with the school and, more importantly, with their network of brothers and fellow Green Knights as they move on to the next chapter in their lives.
Breakfast was served by Adrian Puzio '96 and Ian Leffler '94, along with Steve Odierno '93 and Dave Stoto. Puzio and Leffler have formed a Green Knights in Business networking association and encouraged the seniors to sync up with sjrconnect.com to find fellow Green Knights willing to help them on their journeys.
As a special surprise, Mr. Andrew Oddi presented the bowling team with their Big North league championship jackets - the program's first title since 1987, led by four seniors.
After breakfast, the seniors gathered in the gymnasium for photos in their college colors. Among the represented schools were Boston College, Bucknell, Columbia, NYU, UPenn and Tufts.
Print