Student of the Week: Nino DeMarco '22 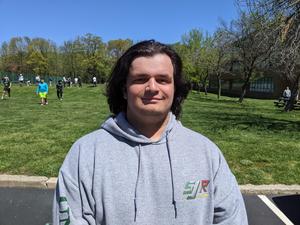 As a member of UNICO, Nino DeMarco '22 follows the motto, Service Above Self, as closely as possible.
The senior has been a member of SJR's program for four years and been part of the lacrosse team, ranked #10 in New Jersey, for three seasons (one was canceled due to Covid).
He is also an Extraordinary Minister of the Eucharist after being installed at the Mass of the Holy Spirit at SJR in September. An active Catholic, he volunteers at his parish, St. Leo's in Elmwood Park, as an altar server and with various needs around the church.
The Hasbrouck Heights native is headed to Millersville University in Pennsylvania in the fall.
"I'm going to study meteorology and they have a Top 25 program in the country so I'm excited for the opportunity," explained DeMarco.
Nominated by Deacon Joe Sisco.
Print