Student of the Week: Chris Williams '23 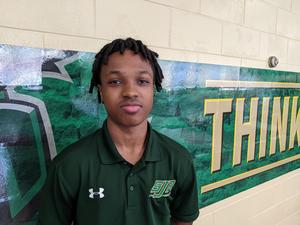 If Chris Williams' rise within the halls of SJR is indicative of his future, the sky is the limit.
The Englewood native began his freshman year in mostly Accelerated courses and played basketball for the frosh team.
He added an Honors Chemistry class to the workload as a sophomore and saw limited action on the varsity hoops team in a season shortened by Covid-19. His GPA was 95.85 and he averaged 2.8 points per game.
As a junior, he added 2 AP courses to a pair of Honors courses AND upped his GPA to a 98.4. On the court, Williams averaged 10.4 PPG, helping SJR to a 15-10 record under Coach Doherty's watch.
What will senior year bring for Williams - and his Green Knight teammates?
First things first, Williams has to close out the academic year - finalizing his favorite class, Computer Science with Mr. Winston, this week.
While he hasn't gotten too far in his college planning, he thinks he'd like to get outside the NY metro area, hopefully play basketball, but definitely study computer science.
Nominated by Mr. Stoto.
Print