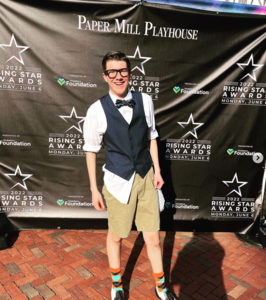 Congratulations to Thomas Snyder '23 for being honored as a Paper Mill Playhouse Rising Star Award finalist at the ceremony on Monday, June 6. Snyder had been nominated for Best Leading Actor for his performance as William Barfee in the Academy of the Holy Angels' production of The 25th Annual Putnam County Spelling Bee.

Due to Covid-19 delays in the winter months, SJR's production of Mystic Pizza was not eligible for the 2022 awards.

Modeled after Broadway’s Tony Awards, the Paper Mill Playhouse Rising Star Awards was created in 1996 to encourage and reward exceptional accomplishments in the production of New Jersey high school musicals.