Student of the Week: Michael Chang '23 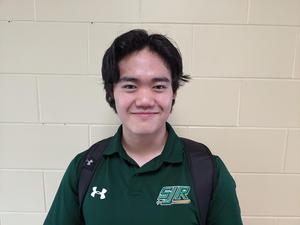 Junior year typically represents a change of pace in high school. Gone are the days of settling in, making new friends and gaining an understanding of the terrain. The initial trepidation of high school is replaced by visiting colleges, standardized tests and even proms.
Unless you're Michael Chang and you're doing both.
Chang transferred to SJR as junior, meeting new friends and new teachers all while keeping an eye on the future with three AP courses in his workload. And yet he excelled, earning a GPA of more than 100 for the year and no final grade lower than a 94 in any class.
His favorite was AP Government with Mr. Lanari and he cites Mr. Kievit as his favorite teacher (Economics).
Along the way, he contributed to the success of the hockey team in the Gordon Conference and was even named captain for next season. He also served as an Ambassador, helping at Open House just three weeks after arriving on campus.
Asked the difference between SJR and his public school, Chang states, "Everyone here is a little bit closer, they're all friends, which is unique."
Nominated by Mr. Winston. ("I think he thinks I'm better at physics than I really am.")
Print