Student of the Week: Cooper Kurtz '23 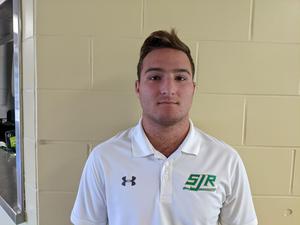 Cooper Kurtz '23 prides himself on taking leadership roles whenever possible. He has given countless tours to prospective students, serving as a Gold Ambassador both at Open House and private tours.
In his spare time, Kurtz loves to drive (his favorite car he's driven is a Ford GT40), and in December of 2020, he had an idea. A car show on campus to raise money for a local charity and his fellow Green Knights. Cars on Campus was a booming success, raising more than $40,000 in two years for Hopes & Heroes Children's Cancer Foundation and SJR's own financial aid program.
In the classroom, Kurtz has taken a shine to the social sciences, opting for American President and American Government electives as a senior. The Alpine native is committed to the United States Naval Academy, where he plans to major in political science while playing lacrosse.
Not surprisingly, he hopes to serve his country by working in a government agency in the future.
Print