Student of the Week: Jack Lyons '23 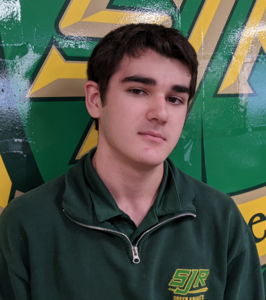 Jack Lyons '23 isn't afraid to try new things. In fact, he "never likes doing the same project twice."
As one might imagine, his interests are varied.
Lyons is a member of the SJR wrestling program, the stage crew, the chess club and played tennis. Off-campus, he enjoys video editing, prop creation, miniature painting and other creative projects, including "a fondness for cryptography."
In the classroom, the Bogota native is taking a rigorous course load including AP Psychology, Forensic Science, Economics and Calculus.
While AP Psych is his favorite class this year, he also has a soft spot for forensics. This summer, Lyons participated in a week-long Forensic Science program at American University for the National Student Leadership Conference (NSLC)in Washington, D.C. In the program, he studied different homicide cases and then was tasked with teaming up and solving a recreated scene.
Video from NSLC f/t Jack Lyons '23