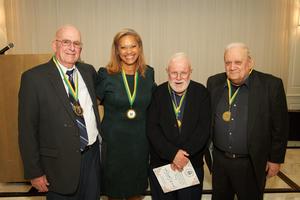 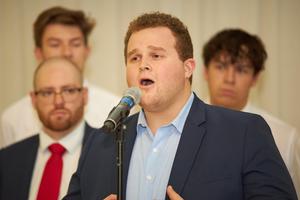 Photo Gallery
Video Recap
YouTube Playlist
On Thursday, October 27, Saint Joseph Regional celebrated its first annual Green & Gold Gala at Edgewood Country Club in River Vale. The event saw nearly 200 members of the SJR community gather in celebration of 60 years of school history, while honoring four key figures.
Mrs. Lynn Giles-Harris P '09, '15, '16 and Br. John Dunning were inducted into the SJR Hall of Fame. Both humbly thanked the school for the opportunity to serve and recognized the importance of family and supportive parents in the life of the school.
Br. Lou Calmel and Br. William Cushing received the Pater Salvatoris Medal, for a lifetime of service in carrying out the mission of SJR. Calmel, a legendary teacher, flipped the script - thanking students and fellow staff members for teaching him over the years. Cushing recalled the dedication of parents and volunteers in making the students experience a memorable one.
Throughout the night, the SJR Performing Arts program took center stage with three musical numbers from the Class of 2016. Chris Cheeseman led the way with a rousing rendition of "The Impossible Dream" from Man of La Mancha, followed by Nick Berninger's stirring "You Will Be Found" from Dear Evan Hansen. To close out the night, classmate Joe Criscione sang a beautiful version of "Home" by Phillip Phillips as scenes from 60 years of SJR life scrolled past on screen.
Special thanks to Karl Kilb '82 and Liam Fahey '23 who emceed the event and to John Asselta who ran an outstanding live auction.