Student of the Week: Fintan Henry '23 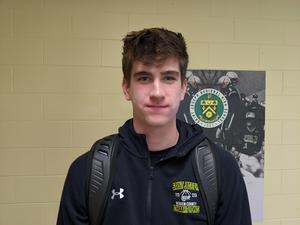 As Student Council President, Fintan Henry '23 believes it is his job to foster camaraderie and brotherhood among his peers.
"The best part about Student Council is seeing people come together to collaborate and do whatever is best for the school," explained Henry.
An AP student who also plays three sports, the Hillsdale native earned Principal's List recognition during the first marking period, with an overall GPA of 98.9. In addition to cross country, basketball and lacrosse, he serves as a Green Knight Ambassador and writes for The Guardian newspaper.
Outside of SJR, Henry earned his Eagle Scout and serves his community through his troop and his parish.
He has narrowed down his college choices to Providence, Seton Hall and Xavier as he seeks "a good Catholic school with good sports and academics."
Nominated by Mr. Bruno.