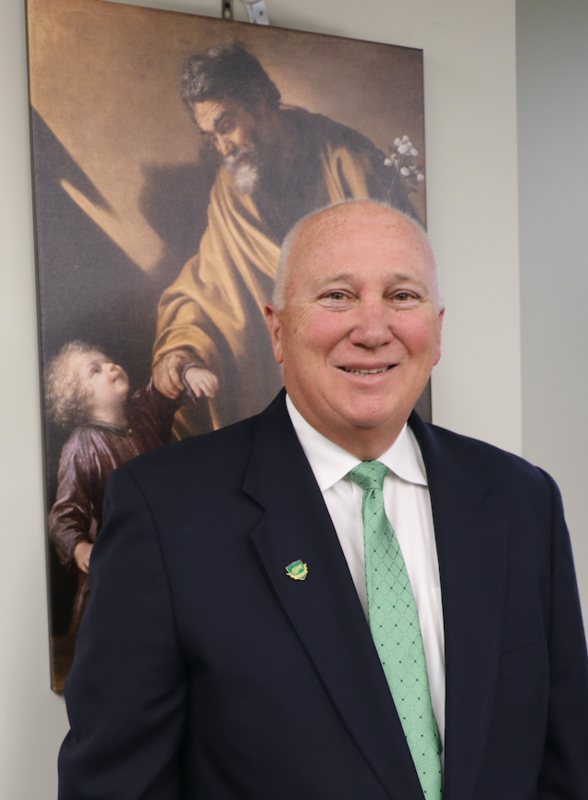 Robert Fazio, a lifelong administrator and head of school, with deep ties to Catholic education and Bergen County, has been named the third president of Saint Joseph Regional High School. His tenure will begin January 17.


“Our search led us to the right candidate at the right time for Saint Joseph Regional High School,” said Brother Christopher Hall, Associate Superintendent for the Archdiocese of Newark, Office of Catholic Schools, noting that the committee voted unanimously to appoint Fazio after an extended search.


Fazio has served at Don Bosco Prep since 2016, most recently as school president. He earned a B.S and M.A. in Administration and Leadership from St. Peter’s University. He also received an M.A. in Urban Studies from New Jersey City University,


Prior to his tenure at Don Bosco, he had served as Assistant Superintendent for the Union City school district. He also served as Executive Director at Union City High School and Principal at Emerson High School. From 1993 to 1998, he served as Principal at Columbus Middle School in Clifton, where he earned a visit from President Bill Clinton after partnering with Bell Atlantic to bring computer technology to the school’s learning environment.


Fazio grew up in Union City before graduating from Emerson High School. He started his career in education and administration almost immediately after graduation, back at Emerson in 1977.

‘More for our boys’ In a video message to the SJR community, Fazio said he is “honored to be a new president at St. Joe’s and to have been welcomed by everybody.”


“I love my job and love helping schools grow. My ultimate goal is to reach the boys. My role is to help bring in more resources so that the boys get more. That’s the job of the president: to support the administration, the faculty, the staff and the community. The teachers are the locomotive that makes the train go, they’re with your boys each and every day. The staff does so much work behind-the-scenes. I want to support, help and guide. And that’s what I plan to do.”


“I’m thrilled to have Bob Fazio as our new president. Throughout the process, he showed us how much he valued the high school experience for our Green Knights,” said Dan Colonna ‘96, member of the SJR Board of Consultants who served on the search committee. “With my son in seventh grade, Bob’s leadership and track record as a positive role model gives me confidence for the future of our school.”


Fazio arrived at Don Bosco Prep in August 2016, eventually becoming its first lay president. He oversaw transformative growth across campus in enrollment, alumni support and programmatic offerings. During his tenure, a new $21M academic building was constructed on campus. He started a new pathways program in multimedia arts, robotics and engineering as well as business to provide experience for students beyond the classroom.


His vision as president extended not only to bricks and mortar, but to the future of the school as he led a team that raised $5M towards an endowment in 2020 and 2021.


At Union City, he took the lead on the construction of a new Union City High School at a cost of $200M. He also led a 100-person security team for his 21 schools, ensuring best practices were in place for the safety of his students. His work at Christopher Columbus Middle School garnered an invitation to the White House and a visit from President Clinton after he formed a business partnership to bring computer technology to the homes and classrooms of district families. The program was recognized by Bill Gates in his book,The Road Ahead, as well as Newt Gingrich in To Renew America.

“Bob brings Saint Joseph Regional a powerful mix of administrative accomplishments, a deep love of Catholic education, a record of tirelessly working for his students, and visionary leadership in secondary education,” said Principal Michael Bruno ‘05. “He is eager to strategically build on SJR’s strong foundation across all aspects of school life. I’m thrilled to have his support as we continue to do great things for our Green Knights.”

An Outside Perspective with a Commitment to Listening


Fazio has spent the past 32 years living in Bergen County and brings familiarity with SJR along with him to the new post. However, he also has the benefit of seeing the school’s strengths from an alternative perspective.


“All of the schools in upper Bergen County are tremendous institutions of higher learning. We are in a competitive environment. I hope to bring an outside skill set that maybe sees things through a different lens, looks at things in a different way.


Fazio also professes to be a data-driven leader, using data to make educated and effective decisions to move forward.


“I want our alumni to know that when I look at this campus, I see the beauty of what’s going on and I see the potential. I’d love to get out there and meet every alum, having a morning breakfast - I call it ‘Breakfast with Bob,’ where I can sit down and talk with people that will invest in the future of this school.


When we talk about enrollment and the student body, it’s about getting out there and selling the greatness of this school, who we are and what we stand for.” Fazio and his wife Maureen are strong believers in the product, having sent all four of their children through Catholic school. The couple are long-time parishioners at Our Lady of Mercy in Park Ridge.


In his opening meeting with school faculty, Fazio recalled the words of Mother Teresa.


“She said ‘love is the greatest gift’ and I plan on loving people until they find out to love me. Time takes time. It’s going to take time for people to trust and believe in me. But eventually that love will come my way.”

“There are great things that go on here at SJR. A clean, safe loving environment that has rich academia is what you have already and I just plan to come in and support and help and guide and teach.”