CAMP MISSION
To teach the athlete the mental and physical aspects of the game
to elevate his game and make him a better all-around player.
Ages 8 and up
Two Sessions
Session 1 July 11-14 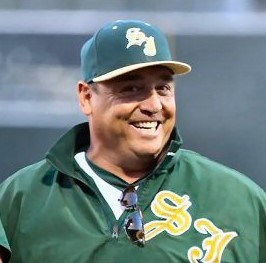 SJR Varsity Baseball Head Coach
Coach Mark Cieslak was an All-league, All-County, All-State, and All-Decade football, baseball, and basketball player during his high school career at Palisades Park, where he earned Athlete of the Week in all three sports. He also was awarded All-American Athlete of the Year, Cooperstown Hall of Fame Athlete of the Year and was a recipient of the prestigious YMCA award, while in high school. This past year he was inducted into the Palisades Park Hall of Fame.
At the collegiate level, Mark was a two-time All-District NCAA DH. He received Athlete of the Week three times during his baseball career and was named to the All-Decade team.
In 1984, he signed with the Cincinnati Reds as a left-handed pitcher. While on the Red’s farm team in Sarasota, Florida he posted a 7-2 record with a 1.49 ERA. In his first year, he led the league with 76 strikeouts, and was awarded the 1984 Most Valuable Player award at Riverfront Stadium in Cincinnati. He also played in the Atlanta Braves and Boston Red Sox organizations.
After his professional career came to an end, Mark coached at Palisades Park High School, where he received Coach of the Year honors several times. In 2004, he became director/coach of the Jersey Bulldogs, a club baseball organization with age groups ranging from 9U to the high school level. Coach Cieslak began his SJR coaching career in 2007 as the Head JV Coach. He led the Green Knights to an undefeated season, and a JV tournament championship. He has been a varsity assistant since 2008, during which time SJR won two League titles, two County Championships, and a State Sectional title. In 2015, he was named Varsity Head Coach of the Green Knights.
As Varsity Head Coach, Cieslak has led the Green Knights to 1 State Championship, 1 Sectional Championship, 3 County Championships and 3 League titles. This includes the New Jersey Triple Crown (League, Sectional, State) in 2021. He has been named coach of the year three times during his tenure at SJR.
SJR Summer Baseball Camp Website