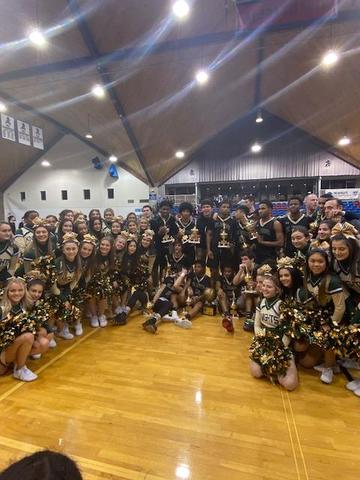 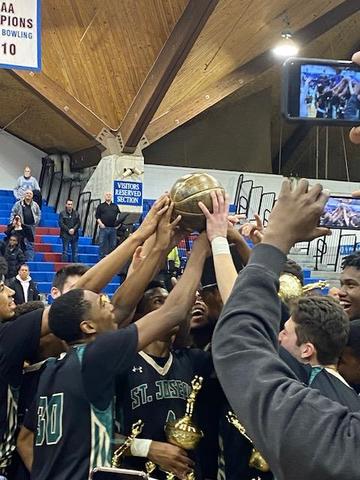 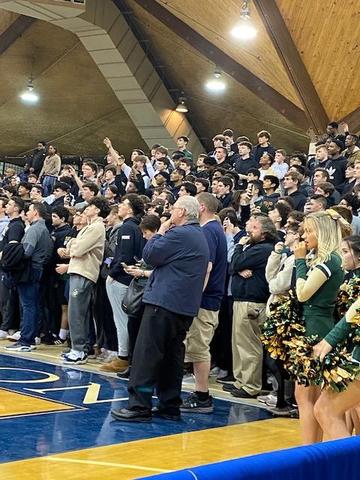 After Saint Joseph’s came away triumphant, 73-64, against Don Bosco on February 22, an atmosphere of uncertainty loomed over the team’s prospects of the championship. Standing between the Green Knights and the Bergen County Jamboree title was Bergen Catholic, SJR's toughest rival. Highly favored by prognosticators, the Crusaders had bested the Green Knights, 58-52, earlier in February.

SJR needed to think differently for the finals.

On February 28, fans and spectators packed into Fairleigh Dickinson University’s Rothman Center. Even before the opening tip, the Green Knights' fan section was filled. SJR was widely considered the underdog, as they had lost seven straight to Bergen Catholic, spanning three seasons.

But it only takes one game to end that streak.

SJR took an early lead after Nazir Williams ‘20 scored a layup just thirty seconds into the game. To the delight of the faithful, the Green Knights eked out a one-point lead at the end of the first quarter, 18-17.

The second quarter saw a rejuvenated Crusader team fight back and overcome the early deficit. At halftime, the score read 33-30 Bergen Catholic. Spectators began to worry and wonder if SJR had been burned out with still two quarters to go.

Foul trouble was becoming a real thing, especially with starter Daniel Lans '21 earning three himself. Nevertheless, the Green Knights met in the locker room to discuss strategy, knowing they needed to recover from the slump, break the pattern, and defy the odds.

The third quarter opened with a breakthrough for SJR. Invigorated by the halftime break, the Knights scored 10 points in just over three minutes.

Bergen Catholic scored none over that same time frame. Morale soared in the stands as SJR took a 40-33 lead.

The final stanza saw Bergen Catholic continue to push and try to cut into the lead. Ecstatic fans cheered “We love Danny!” (for Lans) as the Green Knights clutched their gains with an armored grip. Every basket by Bergen was matched by SJR. In the end, their six-point lead stayed intact and the final score of 67-61 meant the Green Knights had captured the title.

Williams scored 26 points, pacing the team yet again. After the game, “I’m so happy that we finally won, but it hasn’t fully settled in yet.”

Malcolm Capers ‘20 was in an unique situation post-game. After transferring from Bergen Catholic in 2018, defeating his old teammates was extra special. His former classmates were “definitely giving it to me," but Capers kept his eyes on the prize and scored 4 points in the victory. “This was very big for me,” he stated, “I needed this win.”

Head Coach Michael Doherty ‘82, who earned his 500th coaching victory earlier this season, was proud of his team for the W. “The student-athletes made the most of their opportunities. It’s a whole different world playing with a lead rather than having to chase somebody."