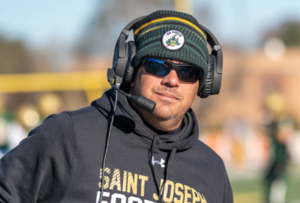 While Marangi is “thrilled to be entrusted with fostering the mission of St. Joe’s, which is to build the Vir Fidelis, the faithful man,” it is clear that the players are just as excited.

“It's my senior season. We have a lot of talent, and the team has a lot to show this year," explained Chris Servidio '21. "One of the things that I'm most happy about having Coach Marangi as the new coach is that we stayed in-house. Having someone who already knows the traditions that this school has is crucial to the program.”

One thing that all of the players interviewed discussed was Coach Marangi's impressive resume on the field. As defensive coordinator at Don Bosco from 2004-2016 and at SJR from 2017- 2019, Marangi has been a part of ten state championship-winning teams and even two national championships. The teams he has coached have a record of 173-33.

Coach Marangi said he expects big things in the upcoming season. “We have a great core returning. I've seen the hunger for success already taking place in our weight room."

"For me, personally, the biggest transition is that now I’m going to be responsible for all 3 sides of the ball, the CEO of a team of 80 members.”

A few of the current seniors expressed regret, only in the sense that they wouldn't get to play for him next season.

“He is one of if not the best coach I’ve ever been around," said Terrence Spence '20. "He knows football inside and out and has expanded my football knowledge greatly. I owe a lot of what I am as a football player and young man to him.”

Shane Stewart '20 added, "I would be excited for sure about next season, because he knows what it takes and has a big history of coaching big time teams.”

Although Coach Hoffmann will be missed, Spence believed that “good can come out of change and I think if there’s any guy that can get it done, it’s Coach Marangi. He also has the best coaching staff in the country behind him so I know the team is in great hands."

But how will a new head coach change the playing style of the team?

“The playing style of the team won’t change from what I've heard. Coach Marangi did a great job with the defense for the past 3 years and now will have a chance to lead everyone," believed Stewart.

Spence thought otherwise on one side of the ball, "the offense might change up a little bit but the defense will stay the same since Coach is a defensive guy.”

Whether the team's philosophy changes or not, one thing that remains similar is that we can look forward to a successful season with Coach Marangi at the helm.

“We have big goals this upcoming season and have a lot to make up for," said Frankie Monte '21. "We came up short last year and I trust Coach Marangi will get us another ring. The team is closer than ever and I couldn’t be more excited for this upcoming season.”