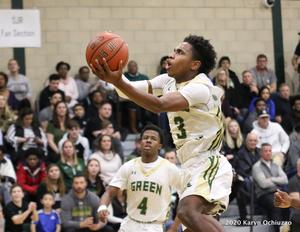 The time has finally come. A brand new Green Knights basketball season is getting its much anticipated start-up a little later than usual this year. The defending Bergen County Jamboree champions have been hindered with COVID-19 complications since the resumption of winter sports on January 2. Nevertheless, this group is poised to find success again in 2021.

After losing key seniors from last year’s team, the returning players are determined to pick up right where they left off. SJR Media had a chance to catch up with captain Brian Brennan '21 who talked about his expectations for the upcoming season.

What are your personal goals for this upcoming season?

With the shortened season, personally, I’m just looking to play hard and compete every game. This year we lost a lot of key scorers like Naz, Ansley, and Dyree so hopefully I can step up and take a bigger role on offense this year.

What expectations do you have for the team as a whole?

I expect our team to go out and have a great season. I hope that we can get enough games in to keep ourselves in the top 5 of the Big North rankings. It’s going to be difficult to battle through all the COVID-19 shutdowns so hopefully we can overcome that and have a good season.”

Just to go out and compete everyday in game or in practice. That’s what you need to do really if you just go out and work everyday you will find yourself on the floor. I also think focus more on the defensive end then the offensive side. That’s what gets you in the game, if you can defend you can play more. That’s what helped me personally.

Alongside Brennan this season is star guard Daniel Lans '21. Lans had a tremendous junior campaign including many clutch moments that guided the Green Knights to victory.  He will look to continue this same dominance this year as a part of SJR's strong back court.

Head coach Michael Doherty '82 enters his 31st season at the helm for the Green Knights and shared his thoughts on the upcoming season.

How has it been adapting to the COVID-19 protocols on the court thus far?

So far, we have had just a couple of freshmen and one JV game due to Covid-19 issues.  So far so good.  With excellent planning and guidance from our Athletic Director Mr. Logan and our trainers, we were able to ensure all safety protocols were in place and followed throughout the games.  Only those considered "necessary personnel" (ie, players, coaches, trainers, officials, etc) are allowed to be present, so there are no fans allowed at games. That's tough, but the school will be livestreaming all games through the SJR Youtube channel so parents and all fans can still see the teams play.”

What role do expect the new underclassmen players to have this year?

With the graduation of so many key guys from last year's varsity, we will be counting on contributions from a lot of new guys. We will count on seniors Lans, Brennan and James Morrison to lead the way.

Unfortunately, because  the season has been modified due to Covid-19, there will be no Bergen County Jamboree or state tournament this year. COVID-19 has certainly put a dent on this modified season  but that’s not stopping the Green Knights from getting business done on the court. SJR is excited for the first tip-off of the season.