2 Green Knights Nominated for I AM SPORT Award 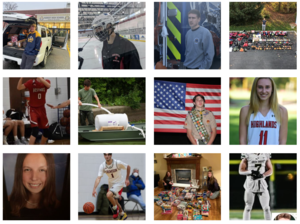 Koliopoulos '21, Schuh '22 recognized for service and volunteerism
Vote: https://bit.ly/3rErInJ
Ryan Koliopoulos '21 and Peter Schuh '22 were recently named finalists for the I AM SPORT award from USA TODAY High School Sports (North Jersey).
The I AM SPORT Award was created to honor high school student-athletes who volunteer their time to benefit those in their community.
Koliopoulos was a member of the #9 ranked Green Knights hockey program this winter, all while preparing for his certificated as a volunteer EMT in Ringwood. He serves as a special education para for a catechism program in his home parish and assists their annual art show fundraiser.
Schuh started in the defensive backfield for the #6 ranked SJR football team and also excels on the track. He has volunteered as a youth coach in Wyckoff for the past five years, helping with the Northern Bergen JFL as well as the McCourty Twins Football Camp. He also serves on the Eva's Village "Behind the Seams" committee and partnered with Ramapo College in support of the fight against eosinophilic diseases.
Both Koliopoulos and Schuh have participated extensively in SJR's ministry programs, including the Covenant House Sleep Out.
Get out the vote! SJR was the only school in North Jersey with TWO (2!) finalists. Of the fourteen finalists, the trio with the most votes will be invited to the awards show in June where the winner will be revealed.
Print