Student of the Week: Will Tallant '21 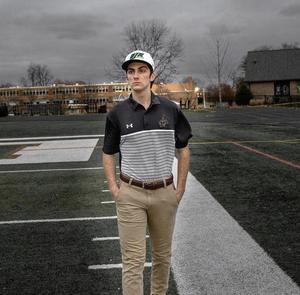 Senior Aspires to Sports Journalism Career after Fordham
Like many Green Knights, Will Tallant '21 has aspirations of pursuing a career in sports though his plan goes well beyond the field of play.
Tallant, a member of the SJR Media Club and a contributing writer for the Guardian, has plans to become a sportscaster in the future.
Slated to attend Fordham University in the fall, he will major in film and television with a minor in sports journalism.
Besides being an ambassador and playing for the baseball team, Tallant is a member of UNICO, Marist Youth Club and even models for the SJR Armory.
Despite his broadcasting and journalism aspirations, his favorite class as a senior: AP Government and Politics. In fact, a 96 in that class - up 6 points from the second marking period - helped him earn Principal's List recognition for the third time.
Outside of SJR, Tallant is something of a neighborhood handyman.
"I run my own business - Cupsaw Clean Ups. It's basically a professional title for the neighborhood kid who shovels driveways, rakes leaves, mows lawn and does other tedious tasks around the house."
Nominated by Principal Bruno and Mr. Donnelly.
Print