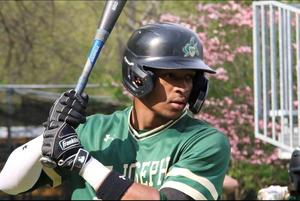 Green Knights defeat Don Bosco Prep for League Title
By Will Tallant
It was truly a roller coaster ride for the Green Knights as they defeated Don Bosco over the span of two different days to win the Big North Conference title. After being down 8-7 in the seventh, SJR put together an outstanding comeback led by Jimmy Romano '21. Romano doubled to kick things off followed by an Albert Serrano '21 single down the third base line. The Green Knights then loaded the bases with nobody out and the game tied at 8 when Dan Maglio '21 hit a ground ball to third. Don Bosco's third baseman sailed a throw over the second baseman's head to allow 2 more runs to score and give the Green Knights a 10-8 lead. Then the rain came. The game was then suspended until Thursday (5/27) afternoon with Ellis Garcia '21 at the plate with the bases loaded and 1 man out.

On Thursday, Garcia struck out which passed the torch to SJR's hottest hitter, Sean Hard '21. Hard smoked a triple to right field which gave the Green Knights a 13-8 lead. That was all SJR was going to need this time as Nick Martinez '23 came into shut the door and secure the Big North title.

The Green Knights are now 21-1. After winning their league, they're next goal is to win the county championship. SJR will face Bergen Catholic on Saturday (5/29). SJR will be the home team as the game will be played at Don Bosco at 4pm. If the Green Knights win on Saturday, they will then face the winner of Don Bosco/Pascack Valley on Sunday (5/30) in the Bergen County Championship.
Print