Student of the Week: Kevin Loughlin '22 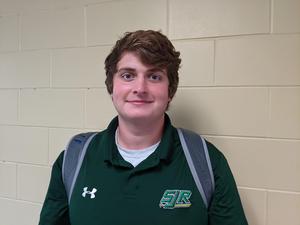 As Kevin Loughlin '22 eyes the Ivy and Patriot Leagues in his future, he doesn't to take time to look backwards to mentor younger Green Knights as they begin their journey.
The Wyckoff resident is a member of the National (and Spanish National) Honor Societies and, as part of his duties, he tutors SJR freshman after school during the week.
When asked what he likes about it, he stated "it's fun to help the younger guys out."
From 2:00-2:45, NHS members including Loughlin are available in the cafeteria for study hall before various practices begin.
For Loughlin, that serves as a breather between a rigorous academic schedule, with 3 AP courses, and a rigorous practice schedule as a captain of the Green Knights football team. He is the only returning starter to an offensive line that saw Audric Estime '21 set a new standard for rushing at SJR. Loughlin's leadership is a key part of back-to-back games with a 100-yard rusher for the football program as they picked up consecutive victories.
Mr. Stoto cites Loughlin's work in the classroom, including a recent 100 on his AP psychology exam, as evidence of his potential for the future. Loughlin named Mr. Lanari as his favorite teacher, but pegged English Lit as his top class - shout-out to Mr. Vreeland!
The senior is eyeing Columbia, Dartmouth, Fordham and Harvard as landing spots with an interest in finance or law as a major.
Print