Student of the Week: Saul Garcia '22 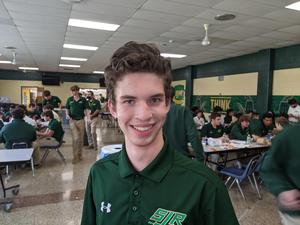 Airmont Native Eyes Actuarial Science in the Future
Saul Garcia '22 is a man with a plan. When asked what he plans to do after SJR, Garcia replies simply that he will study actuarial science. As if that's what everyone says.
Garcia is enamored with statistics, math and science. His schedule shows no signs of senioritis with four AP courses (calculus, English, psychology and statistics), backed up with electives in economics and forensics as well as theology.
In short, the Airmont native is preparing himself well for actuarial science. For those less-versed, actuarial science, in his own words, is a "branch of science which requires a lot of stats and research to maximize the best rates for insurance policies."
While he eyes Siena or Bentley as top choice colleges, Garcia remains active in school life as a member of the cross country team, the robotics club and the art club, where he enjoys drawing. A member of the National Honor Society, he also enjoys tutoring freshmen.
Nominated by Mr. Stoto, who said, "Saul's the type of kid who reads to learn and enjoys it, not because it's an assignment. He's brilliant, probably knows more about psychology than I do at this point!"
Print