Student of the Week: John Ohnegian '22 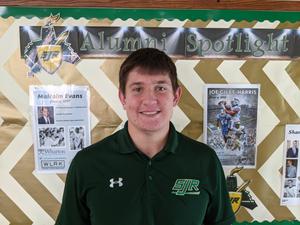 Senior has made 9 straight trips to the Principal's List
The core of the mission of Saint Joseph Regional is to educate the Vir Fidelis: the faithful man who will think, lead and serve.
John Ohnegian '22 certainly fits the bill. In the classroom, the Ramsey native has never missed the Honor Rolls and reached Principal's List status nine straight times. He has done so while taking a rigorous schedule of classes including three AP sections, his favorite being Psychology.
"I like that's it's personal, and that it relates to daily life for real people," explained Ohnegian.
On the field, Ohnegian plays two positions that require leadership. In football, he started at center for the Green Knights who were ranked as high as #3 in the state. And on the baseball diamond, he was a catcher on the SJR team that captured the triple crown in 2021.
He is also an Executive Ambassador, leading prospective families on tours and helping at Open House - and he enjoys the Sam's Robotics Club.
As a servant in the model of St. Joseph, Ohnegian volunteers his time locally with the Hope for Children Research Foundation in his hometown. Most recently, he lent a helping hand to Sports Auction & Beefsteak Fundraiser on November 18.
Nominated by Mr. Stoto.
Print