Student of the Week: Donovan McKoy '23 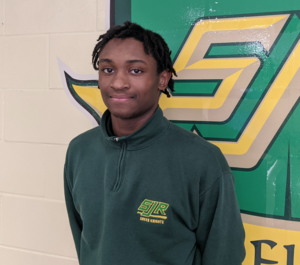 Donovan McKoy is a creature of habit, and a busy one at that. He doesn't have time for too many hobbies, too many video games or too many trips to the mall.
The Englewood Cliffs native has a routine that takes him from school to practice and workouts before homework and a trip to bed.
Nonetheless, it's a routine that serves him well. The SJR junior earned a 94 GPA for the first marking period, up 8 points from his sophomore year. AP Law & Government marks his first foray into Advanced Placement classes and he describes it as his favorite class.
Outside the classroom, he's acquitted himself equally as well. McKoy led all SJR receivers with four touchdowns this season, averaging a whopping 20.4 yards per catch for the Green Knights. While he's received interest from college football coaches, his best sport may in fact be basketball.
The 6'5" forward excelled for SJR in a Covid-shortened season in 2021 and looks to lead the team this year. Coach Mike Doherty described him as unselfish and humble, "he doesn't act like an All-State guy, but he plays like one."
In his spare time in summer, McKoy coached youth basketball in the Englewood area and, while he loves being in the gym, he hopes to pursue a career in the FBI. Looking to major in criminal justice, he has a passion for the field with several family members in the military or the FBI.
While McKoy was nominated by Principal Bruno, he cites Mr. Oddi as his favorite (non-family) basketball fan.
Print