Christmas Concert Is a Hit 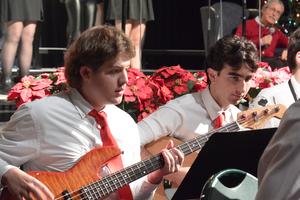 Photo Gallery
By Aidan Woods '22
The Annual Christmas Concert is an event that parents and students of the St. Joe’s community look forward to every year. It is also an important time for the SJR chorus and band, for the Christmas concert is one of two major yearly events for them. The girls who participate in SJR’s school shows performed in the concert as well.
The 2021 Christmas concert was a success, mainly due to the hard work of all of the students involved, chorus director Richard Todd Adams, band director Joseph Martorano, and director of performing arts John Asselta. The show also wouldn’t be possible without performing arts general manager Evan Hoehn, sound manager Eric Fredericks, videographer Craig Janos, light manager Roger Kintish, receptionist coordinator Kim Buscher, Ben Wasser ‘24, and Patrick Reilly ‘24.
The SJR chorus sang in the first act such great songs as “What Christmas Means To Me” (led by Frank Perrone ‘24) and “Carol of the Bells.” Solos of “Happy Christmas (War is Over)” by Michael Mainelli ‘24, “White Christmas” by Taylor Terry ‘22, and “Holly Jolly Christmas” by Josh Friedman ‘24 helped brighten the holiday mood. As the concert went on, duets were performed by RJ Buscher ‘24 and Ella Marron ‘23 of Midland Park High School (“Baby It’s Cold Outside”), and Frank Perrone ‘24 and Emily Kenny ‘25 from Ramsey High School (“Blue Christmas”).
Once the chorus left the stage, the band, which consisted of 21 students, had its time to shine. They performed musical masterpieces from Frozen and The Polar Express. With the blaring of Joseph Monte ‘23’s trumpet, the soft whisper of Kai Alberto ‘22’s flute, and the deep tunes of Nicholas Pantano ‘25’s standup bass, the SJR band was in full force at the concert. To close off the first act, there were additional solos by Hannah Shinder ‘25 from Bergen County Academies (who performed “Never Fall in Love”) and Jack Laux ‘24 (who sang “Have Yourself a Merry Little Christmas”). The chorus and band came together at the end of the act to perform “Feliz Navidad.”
During intermission, Santa Claus took a short break from toymaking to visit St. Joe’s and invited all of the guests to refreshments in the cafeteria.
The second act of the show began with the male chorus, led by Lucas Mortell ‘24 and Liam Fahey ‘24, singing “Someday at Christmas.” This was followed by the female chorus singing “Christmas Lullaby.” The next two solos of “See Amid the Winter’s Snow” by Erin Teasdale ‘22 from Clarkstown South High School (who sang in every SJR concert throughout her high school time) and “Mary Did You Know?” by Fahey kept the audience captivated. The band took over once again to perform “Deck the Halls” and “Jingle Bell Swing.” To close out the second act, Anna Calev ‘22 of Fusion Academy sang “Grown-Up Christmas List,” Thomas Snyder ‘23 sang “The Christmas Song,” and Christina Priestner of Pascack Hills High School sang “O Holy Night.” The chorus returned for its last individual performance by playing “Furaha.” The grand finale of the SJR Christmas Concert brought together the chorus, band, and all St. Joe’s alumni in the audience to sing “Joy to the World.”
Print