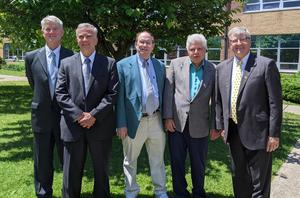 Fifty years ago, the Class of 1971 crossed the stage at graduation and moved on to college and beyond. And, yet, for many of them, SJR always remained home. In 2021, they stepped up to support that home with a gift of $50,000 to commemorate their 50th anniversary.
The class enjoyed a mini-reunion in June at school as 1971 salutatorian Dr. Paul Collier delivered the commencement address to the class of 2021.
In October, more than thirty classmates enjoyed their fiftieth reunion with gatherings at the SJR Beefsteak and Homecoming football game, Mass in the chapel and dinner at Aldo's Ristorante in Wyckoff.
In between, a challenge was issued by a classmate who asked to remain anonymous, offering to match every dollar raised, up to $25,000, by his classmates.
With 24 gifts, the group reached their goal just after Christmas - donating $25,118 toward scholarships/financial aid for Green Knight students.
Thank you to the Class of 1971!
Donor List
Joseph Altonji
James Bell
Paul Collier
Barry Donnelly
John Droney
Carl Ferraro
Peter Flach
Mario Grosso
Robert Johnson
Stephen Kern
Ed Koch
Ken Kuerzi
Allen Magrini
Tom McCarron
Kevin McLaren
Ed O'Dea
Frank Palmieri
Chris Ross
Glenn Roy
John Schimelpfenig
Mike Sprague
Richard Stella
Dan Tomai
Richard Vuich
Print