Student of the Week: Joseph Monte '23 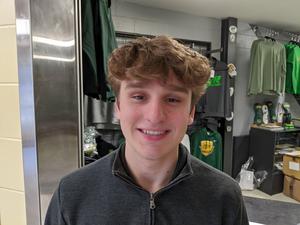 Senior Joseph Monte is always willing to lend a helping hand. He serves as a Green Knight Ambassador and manages the hockey program's social media accounts (@sjrhockey1 on IG). In addition, he volunteers at the Father English Center in Paterson at least once a month with his father, helping to organize donations.
In the classroom, the Wayne native earned Honor Roll status for the first marking period while taking a trio of AP courses.
On the ice, he earned Gordon Conference Player of the Week honors for his twin wins to close out December (3-2 over St. Peter's Prep, 4-3 over Middletown South). He posted a .915 save percentage in the victories.
He spent last year interning with Professional PT on campus, taping fellow student-athletes before games and learning emergency medical tactics.
Monte plans to study athletic training in college, with an eye toward UConn, Delaware and Pittsburgh for their accelerated master's degree programs.
Fave Class: AP Psychology
Musician: Steve Lacy
Nominated by Mr. Stoto.