Student of the Week: Jack Laux '24 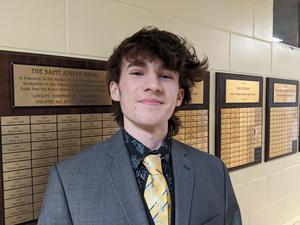 High School represents a chance to get involved, to grow and to take advantage of opportunities. For Jack Laux '24, the past two and a half years at SJR have proven to be just that.
Laux is a Donnelly Scholar, taking 3 AP courses as well as Pre-Calculus, Physics and Spanish III. He managed a 104 GPA for the first marking period despite the rigorous schedule and found himself on the Principal's List for the 8th time as a Green Knight.
Outside the classroom, Laux will star in SJR's upcoming production of Into the Woods as Cinderella's Prince/The Wolf, marking his third appearance on stage.
He also plays tenor sax in the band, sings in the chorus and runs cross country as well as outdoor track. He is a senator on Student Council and serves as an Ambassador.
The Hillsdale native just finished in Eagle Scout project, building shelves and taking inventory in the Performing Arts prop room.
Laux made use of downtime in the summer, giving back at Esopus as he volunteered for a week at the Sacred Heart Camp in August. Prior to that, he spent a week at the New Jersey HOBY Youth Leadership conference at Kean University. During the week, he and his fellow high schoolers heard keynote speakers and addressed issues like climate change, gun violence and poverty.
Nominated by Mr. Donnelly.